You are here: Home / Information / Types of Thrust washer and application 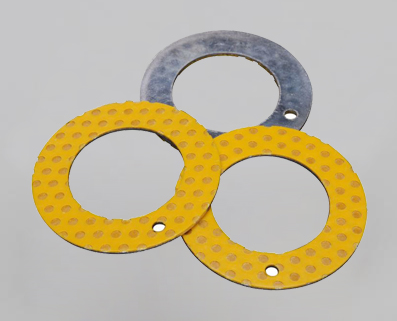 Thrust washers are used in the machine, appliances, power tools, transportation conveyance, and other recreational devices that consist of different moving parts including rotating components, axles, pins, bolts, and bearings. The thrust washers are another form of flat bearings with the shape of a washer. The thrust washers resolve the axial forces and transmit the forces in the shafts. Thrust washers are economical alternatives of rolling thrust bearing. The rugged washer shaped flat bearings are used to prevent the motion of wheels and handle the radial load for thrust and axial loads. The propellor shaft and propeller-driven vessel are used to resolve the axial and linear propulsion forces for the backward and forward spinning.

What is a thrust washer?

Thrust washers are used in different applications such as transmission, pump, axle assemblies, winches, and power take-offs. The thrust washer is used in an electric motor to control the axial displacement. The propeller shaft is used to transmit the axial thrust in a forwarding and backward motion. There are tunable options are used as bearings in motion dampers.

The thrust bearings are used to absorb the axial loads from rotating shafts. The axial loads are further transmitted towards the shaft and work in propeller rapid rotation. Another application of thrust bearing is power drills that work in the drilling process of the tough

Bushingmfg is among the top manufacturers and exporters of various bearings and power transmissions in China. We have established business relationships with customers from more than 20 countries of Europe, North America, Australia, Southeast Asia, the Middle East, and Africa, and our products are well received for their excellent quality and competitive pricing.

What is Bushing Bearing